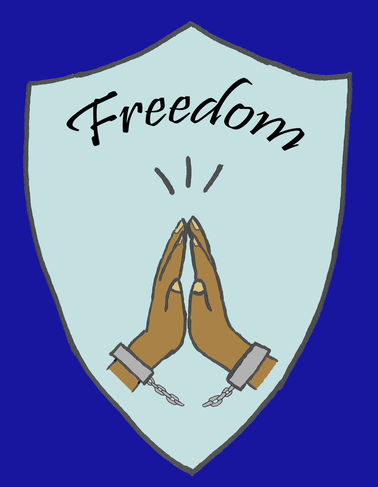 Josephine Bakhita was born in Sudan in Africa in 1869, but this was not the name her parents gave her.  She was born into a happy, wealthy family, but before she was 9 she was kidnapped and sold into slavery.  Bakhita, which means “lucky”, was the name given to her by her kidnappers.  She was re-sold several times.  In 1883 she was bought by Callisto Legnani who was the Italian consul in Khartoum in Sudan.  Two years later, Callisto Legnani took Josephine to Italy and gave her to his friend Augusto Michieli.

Bakhita looked after Augusto’s daughter, Mimmina.  While Mimmina was being taught about what it meant to be a Catholic by the Canossian Sisters, Josephine felt drawn to the Catholic Church. In 1890 she was baptised and confirmed, this was when she chose the name Josephine.

When the Michieli family wanted to take Josephine back with them to Africa, she refused to go. This led to a court case and during this the Canossian Sisters spoke up for Josephine.  The judge decided that because slavery was illegal in Italy, she had actually been free since 1885.

Josephine now became a Canossian Sister.  She lived in Italy, helping in her religious community by cooking and sewing, for 45 years.  Bakhita said, “If I were to meet the slave-traders who kidnapped me and even those who tortured me, I would kneel and kiss their hands, for if that did not happen, I would not be a Christian and Religious today.”

In 2000 Bakhita was canonised by Pope John Paul II.